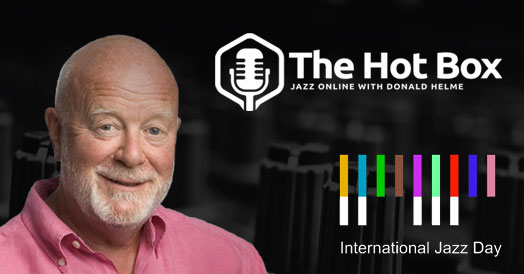 In The Hot Box Episode 29 we celebrate International Jazz Day which is a relatively new affair started back in 2011 by the United Nations Educational, Scientific and Cultural Organization (UNESCO) and gain much ground.

This episode features a necessarily small sample of music created by jazz musicians from many different countries, including Ireland, demonstrating the increasingly wide dimension of jazz music today and the role that it plays around the world. Even the first piece played includes musicians from Colombia, Cuba, Canada, USA, Switzerland, Argentina, Greece, France and Portugal, recorded in a big band led by Colombian newcomer Juan Andres Ospina.

You can hear tracks from Francesco Turrisi’s new album “Northern Migrations” as well as Linley Hamilton’s new album “Making Other Arrangements”. On top of that we have tracks from a surprise parcel from the Norwegian Embassy in Dublin and many more international acts.

Author: Donald Helme
Donald presented Jazz Alley, Ireland’s number one jazz show, on RTE Lyric FM from the station’s first week on air until the end of 2015. “I am not a musician, and have never pretended to be anything other than a lifetime fan with loads of experience and hopefully, good ears.”
More From The Author
TAGS: Donald Helme, The Hot Box, Linley Hamilton, International Jazz Day, Jazz Day, Francesco Turrisi, Juan Andres Ospina
0
Shares