Aleka is a Romanian vocalist, cellist, composer and lyricist who draws influence from her home country, using folk melodies interspersed with jazz harmony and eastern rhythms as well as Debussy and Bella Bartok, inspired by her experience in the classical music world.

The approach of the band may seem like it adheres to the traditional sentiments of a vocal jazz quartet however, it is influenced by a broad spectrum of styles from the roots of jazz to the contemporary reaches of pop music.

'Aleka'. The EP presents 2 original tracks: Breeze and Samah. Samah (Arabic for Forgiveness), is a composition that is very close to Aleka's heart, being inspired and dedicated to the refugee children and all children victims of war. The song tells a story about the moments that children in these situations encounter: pain, sadness and hope.

Along with original material, the project presents the bands' own take on Nick Drake's River Man and the Romanian 'Song' from the 70's movie 'Parasutistii'.

All songs composed by Aleka except for River Man (by NIck Drake) and Song (By Oschanitzky/Pica).
Recorded, mixed and mastered by Leslie Keye at Arad Studios.
Cello recorded by Chris Guilfoyle at O'Rourke Park.
Text on Samah read by Ruba Shamshoum
Cover by Goldmoth Media
Produced by Aleka 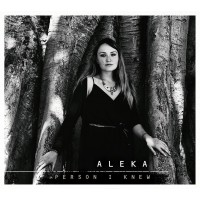 Aleka is a Romanian vocalist, cellist, composer and lyricist who draws influence from her home count..